Question: Why won't these solar heaters cause more heat loss at night than heat gain during the day?

The first thing to keep in mind is that most of the heat we capture from the sun comes in the form of light, actual photons that contain energy that is absorbed by our specially coated water tanks inside the window. Photons are one of the three ways heat energy can be transferred and are the only active method, and of course, there are none emanating from our heater water tanks.

The other two methods of heat transfer are conduction and convection. WikipediA defines these as follows:

Heat conduction, also called diffusion, is the direct microscopic exchange of kinetic energy of particles through the boundary between two systems.

Heat convection occurs when bulk flow of a fluid (gas or liquid) carries heat along with the flow of matter in the fluid.

In the case of a home, convection is by means of the air circulating in the room.

Our solar heater tanks are mounted such that the air space between the tank and the window is sealed, so there should be no air movement to transfer heat from the tank to the glass, which leaves only the possibility of conduction. During the dark hours conduction will transfer some heat to the dead air between tank and window, but because the air is not moving it will be progressively colder the further from the tank. The interior face of the tank does have air moving, so heat will be transferred to the room by this moving air.

An industry source puts it this way:

Spray Polyurethane Foam (SPF) is renown for being a superior material for both insulation and commercial roofing projects, among other applications. SPF is the most robust insulating material on the market today and is frequently utilized to insulate a wide variety of residential, commercial, and industrial buildings.

U.S. Department of Energy (DOE) reveals that air infiltration contributes to 30% or more of your home’s heating and cooling costs. Air infiltrates homes in the form of drafts through any opening in the building envelope, be it doors, windows, or miscellaneous gaps.

Spray Foam FAQ for Homeowners has several questions that may be of interest.

The short answer is that we have found Dianna Blom of Beaverhead Glass to be very knowledgable on this subject, so be sure to make use of that local resource.

A more complete but still understandable explanation can be found at Passive House Windows: SHGC - Solar Heat Gain Coefficient, a part of which is as follows:

Perhaps less understood with energy efficient windows (outside of the Passive House community) is the concept of solar heat gain.

Windows with a high(er) solar hear gain coefficient rating--having a greater ability to harness heat gains from sun and allow those gains to be passed through the window unit into the interior conditioned space--are most desirable (in cold climates). In part, that's the meaning of the term "passive" in Passive House.

The use of such windows reduces (or completely eliminates) the need to actively heat with mechanical/electrical equipment, such as a forced-air heat-pump or geothermal system; hydronic radiant heating; or combustion.

In warm(er) climates, the opposite would be true; one would want to minimize solar heat gain to avoid overheating. In climates that are more temperate, the most desirable setup would be to have windows that have the ability to harness (for free) heat from the sun during the colder fall and winter months, but minimize the heat-transfer during the warmer spring and hot summer months. It is in this climate region of hot and cold where managing solar heat gain is important and can be tricky.

In an apparent contradiction of thermal performance, the most desirable windows for cold weather are those that have high solar heat gain coefficients (high SHGC values) and low u-values. Windows so designed are net energy producers, in that they generate more interior heat (through solar heat gain) than they give back during the evening (through heat transmission loss to the outside).

For those who want to dig deeper

An explanation of the term 'Low-E Coatings'

But keep in mind that Low-E is only one of the possible glass types. Window Technologies: Low-E Coatings

Two technical links from the Passive House Institute US

A technical white paper from the U. S. Department of Energy

Question: Why will homeowners in North Dakato, Montana, and Wyoming benefit the most from energy efficient buildings? 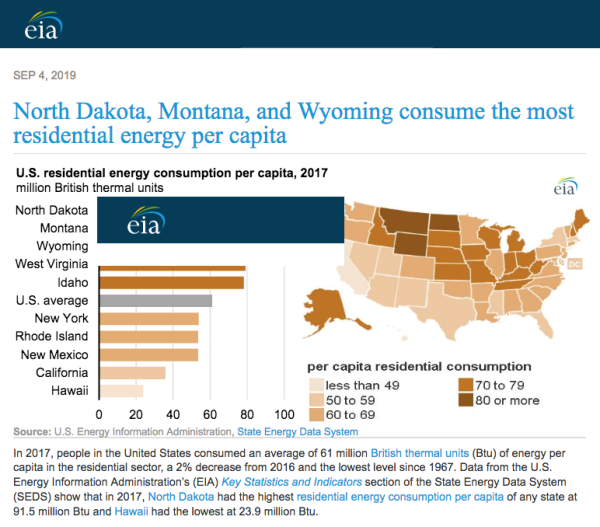 SEPTEMBER 4, 2019 - North Dakota, Montana, and Wyoming consume the most residential energy per capita